Join us as we keep the party going with family friendly games, free food, and a Neighborhood Treasure Unveiling for the Japanese Monrovians!

Japanese American pioneers in California often get overlooked. The early '49ers, the railroad workers, the farmworkers, and even the laundry workers, helped to build much of the state, but the discrimination of the 19th century followed them to the 20th century. By 1900, Japanese American families like the Uyedas, Tsuneishis, Asanos and Kuromiyas came to Monrovia to establish strawberry farms and build grocery stores and fruit stands. Life in Monrovia was challenging for many Japanese Americans who worked endless hours to provide for their families while helping make Monrovia a growing community. However. these same individuals were not allowed to move north of Walnut Avenue. Many of the businesses and family homes were located on or in close proximity to Huntington Drive.

After Pearl Harbor, many Japanese American Monrovians were picked up by the Monrovia Police, at the behest of the FBI, and sent to internment camps. It is said that the Monrovia Police Officers were embarrassed to pick them up because they not only knew them, but appreciated what they did for the community. After their release from the camps, some of these families came home to Monrovia, graduated their children from Monrovia schools, and are buried at Live Oak Cemetery. Their stories are a part of Monrovia's identity and legacy! 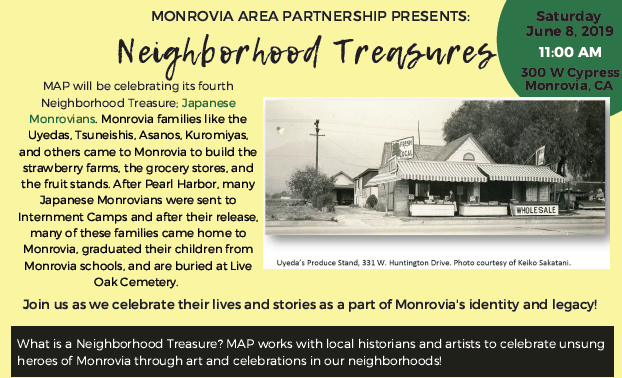