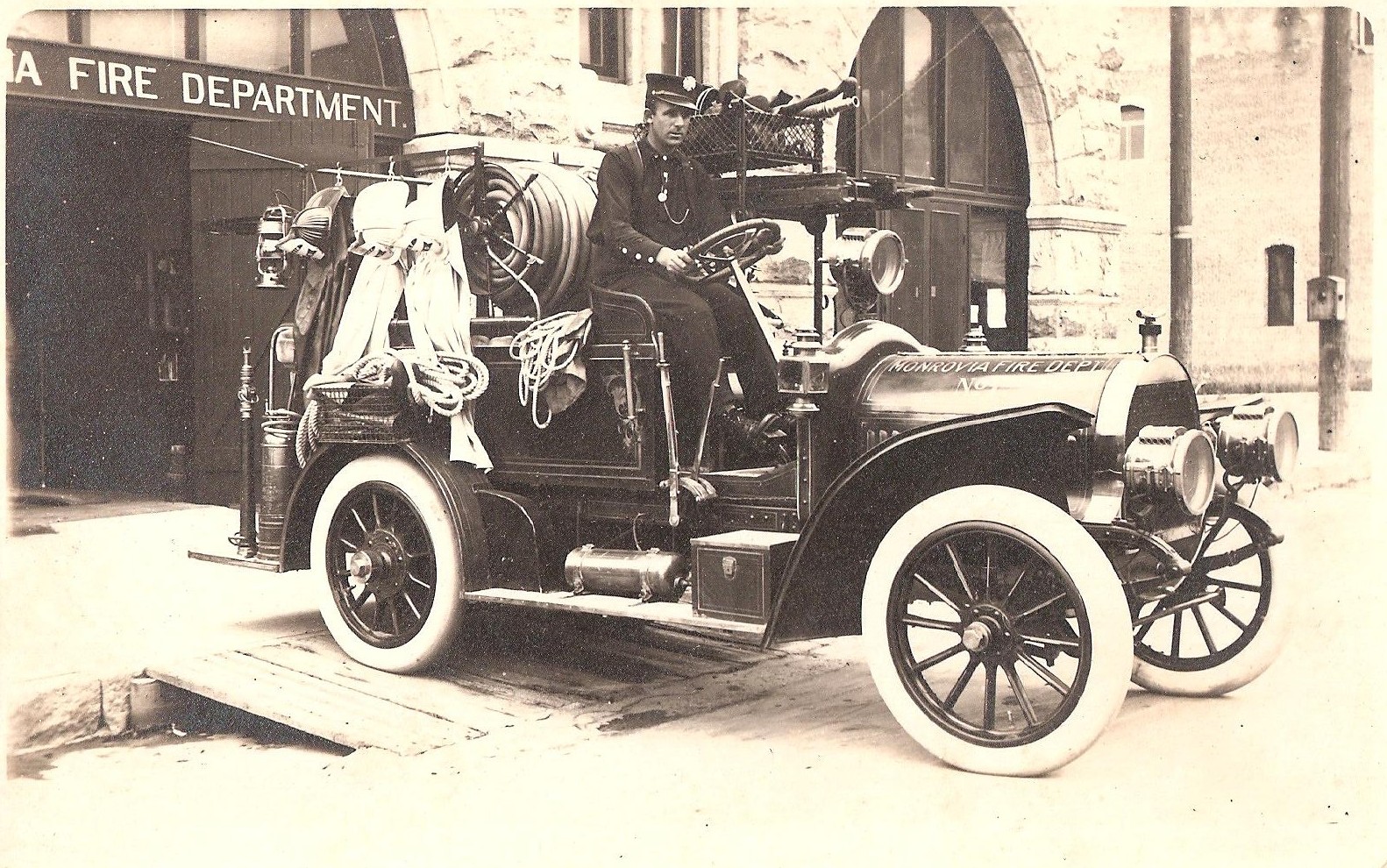 The story of Monrovia Fire & Rescue begins at the turn of the 20th century.

Theodore Roosevelt is president, leading from his “bully pulpit”. A can do spirit is spreading across the country. Interest in expanding civic institutions is growing. Monrovia is not immune.

The fear of a devastating fire haunts every growing community. A small fire can quickly grow to destroy a full city block. Residents of communities of all sizes across the nation are familiar with the cruel effects of a major conflagration. Monrovians were ready to fight back.

In March 1906, a volunteer fire department is organized in Monrovia. Jack Crandall is selected as the first Fire chief. The upper crust of society soon filled out the membership rolls of the new organization. Although capable of reeking havoc on a small town, fires are still infrequent. The department quickly evolves into a social club.

Very little initial funding was allocated for the fledgling group. There is no record of the equipment that the early firemen used and there was presumably little training. On June 7, 1907, a special election is held to vote on several bond issues. Prop 1: $5,500 for an automobile fire engine. Prop 2: $16,000 pipe lines and fire hydrants. Prop3: $10,000 to construct a joint fire engine house and jail.

The bonds require a two-thirds majority to pass and all fail to carry the vote. The new fire department is back at square one. Enter John Baxter. As owner of Fashion Livery Stables located at the corner of Myrtle and Lemon Avenues, Mr. Baxter holds a prominent place in Monrovia Society. He also has a vested interest in fire protection. In 1908, John Baxter donates the first piece of equipment to the volunteers.

The building still stands today with the faded sign just visible over the Devon Restaurant located at Myrtle Ave and Lemon Ave. A horse drawn chemical cart and a few lengths of hose provide Monrovia with its first real firefighting equipment. The cart carries a chemical tank that, when mixed with water, develops pressure and expels the fluid through the hose and towards the fire. Mr. Baxter also allows the horse and cart to respond from his livery. The stable becomes the first fire house.

In a business that requires tons of high combustible hay and straw, Baxter is keenly interested in promoting an effective firefighting organization. In the fall of 1908, a fire breaks out in Baxter’s hay barn near the east end of town.

The volunteer department arrives in full force to combat the blaze. The new chemical cart that John Baxter provided is set up to extinguish the fire in Baxter’s barn. The unorganized volunteers forget to bring the hydrant wrench to open the water supply. The outraged Baxter watches helplessly as his barn burns to the ground. It eventually cost $5000 to rebuild.

In 1909, the Scotia Hotel catches fire. Again, the volunteers can not find the hydrant wrench. The volunteers are at a social event when the call goes out and fight the fire in tuxedos and tail. Fortunately, the hotel is saved when the fire burns itself out. It is said that the fire laughed itself out while watching the efforts of the volunteer firemen. Chief Jack Crandall expresses his outrage over the event. He demands better equipment and paid employees.

On July 6, 1909, the Board of Trustees adopts Ordinance 476. This provides a bond to fund the firefighting improvements that had been voted down two years earlier. Despite these changes, Crandall has had enough of the jokes being leveled at the volunteers. In January 1910, he resigns from the department.

His action brings results. On January 24, 1910 the Board of Trustees adopted Ordinance 491 creating a City Fire Department. C.A. Goodale is appointed to fill the position of Fire Chief until February 7, 1910. On this day, John A. Baxter is appointed Fire Chief, Monrovia Fire Department. The organization is inaugurated with four full time paid firemen and 16 paid-call firemen. One piece of equipment is operated; Mr. Baxter’s horse-drawn chemical cart.